As we continue in Jerusalem we come to a place called the pools of Bethesda where there were many natural springs that were used for the Jewish cleansing rituals. Excavations have shown that the area actually contained two large 45ft deep pools that encompassed an area larger than a football field. The pools were constantly visited by the infirm because of a pagan belief in the healing powers of the waters. In John 5:1-9 a miracle was performed on a paralytic man who had no one to carry him to the waters; proving that it was not the waters that healed, but the Holy Spirit through Jesus. Several churches were erected on this site and destroyed throughout the years. What is left appears to be ruins, but there is still a powerful feeling of the strength of the Spirit here.

We next visit the birthplace of the Virgin Mary, where there is both an Orthodox church and a Roman Catholic church. St. Anne’s is reputed to be built over the home of Joachim and Anna, the parents of Mary. Blessed is she amongst women. 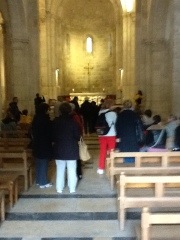 I look for beauty everywhere I go...Culture, nature, food and travel are my passions. I marvel at the blessings God has given us all. View all posts by betzabroad